We hate taxes today, and the world is the richest per capita that it’s ever been. Imagine how much we used to hate taxes.

Studies Suggest
The middle class sees taxation as a threat to their dignity.
Also, that taxes benefit the rich and the poor.

Taxes freak us out:

That’s similar to the increase in deaths due to drunk driving during the Super Bowl.

Back in the Day, Taxes Really Hurt

Ancient Egypt:
Customs Taxes — 10% of animals and goods they carried that crossed the sea
Agricultural tax
Tax on cooking oil

Greece:
Wartime Tax on everyone –> rescinded in peace time
Poll tax on foreigners without Athenian mother and father
1 drachma for men, half a drachma for women –>
Owed once a month.

Great Britain:
868-1066:Danegeld was a tax of two shillings for every 100-120 acres. Tribute so that raiding Danes would not attack.
1337-1453: 100 years war fueled and paid for by oppressive tax policies.
14th century: Progressive tax imposed. Duke of Lancaster taxed at 520 times more than a common peasant. Income tax on the wealthy, office holders, and clergy.
1640’s: Excise tax on essential commodities increased to where a lower class family of four would starve. common lands used for hunting enclosed and peasant hunting banned.
1800: Precursor of modern income tax created to finance war vs. Napoleon, but repealed in 1816. 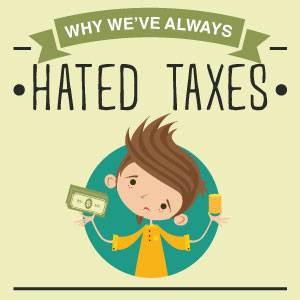