The Real Cost of the American Dream

Entitlement in the U.S.
Life, liberty, and the pursuit of happiness- ideals that paved the way to the “American Dream.” This freedom to attain prosperity, once gained through just the right amount of sweat and determination, has now evolved to a sense of entitlement which cannot be maintained without plenty of debt.

Why are Americans not achieving the dream?

After the 2008 financial crisis, credit card debt peaked in January 2009

Total credit card debt was lowered as delinquent loans were written off, not paid off

How to afford your own American Dream:

Realistic expectations keep the dream alive and the dreamer happier! 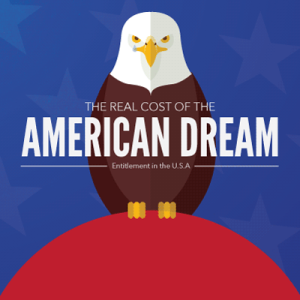